Welcome to your first AoW newsletter of 2021.

As I write, the on-again-off-again covid restrictions are on again. Let’s hope that Covid 19 becomes a thing of the past and life can resume normality. In the meantime, keep an eye on our website and Facebook notifications for dates of closure and reopening of the range.

It is great to see so much local interest in archery so far in 2021. Our club coaches have been kept busy on Saturday mornings with high numbers of visitors attending the Come and Try sessions. The club’s new equipment has been put into regular use.

Archers of Warrnambool welcomed the CEO of VicHealth, Sandro Demaio, earlier this month. The VicHealth CEO and his team were guests of South West Sport, and club members were proud to offer Sandro, as well as members of the South West Sport group, their first archery experiences. VicHealth has provided AoW with funding to run our ArchAngels program in 2021, in partnership with the “This Girl Can” initiative, through which funding for some of our new equipment was provided. South West Sport has supported the club in submitting the grant and working with local organisations to promote the sport of archery. It was rewarding to get all the groups together to try out our sport!

The club also welcomes new members this month. We are looking forward to seeing Aziah and Jason King, Paul Stuckey, and Ben and Thomas Andrews around the club in 2021.

Kai was born in Warrnambool in 2008, and now lives in South Warrnambool.

He took up archery around two years ago, starting off with a recurve bow, but has been using a compound bow for the last 12 months.

Kai’s journey to archery started when he saw an online video of the sport which tweaked his interest. From there he went online and found his local club, Archers of Warrnambool.

His other hobbies include mixed martial arts and music – guitar and drums.

His stand-out sporting achievement(s) are improving his scores in archery and obtaining his orange belt in MMA. Kai was also awarded the Junior High Point Scorer in the AoW Indoor League in the 2020 summer comp.

Kai uses a Quest Radical compound bow of 31lbs, but is looking to increase the poundage now. His highest score with the compound is 243.

Kai is a regular at the club on Fridays and Saturdays, and it’s great to see the improvements he has made in the short time he’s been coming along.

CLUB CONTRIBUTOR OF THE YEAR, 2020

Congratulations to Peter Hill who was recognised as Club Contributor of the Year at the end-of-year breakup in December. Peter works tirelessly for the club, and is always ready to assist members with their equipment or shooting style. He is very deserving of the recognition.

As experience increases, archers frequently upgrade their equipment. Similarly, new members are always interested in purchasing equipment, and would often prefer to buy lower priced second hand gear, and to be able to try it out before purchase.

Club members who have archery equipment to sell may now advertise their “old” equipment through the newsletter.

If you have equipment that you no longer use and would like to sell it through the newsletter, get in contact with Denise (0478 302040) and it will be advertised in the next edition.

As at 17th February, the club can resume normal activities, although numbers are restricted to 20 shooters in any one area. The wearing of masks is mandatory if you are using the indoor range (except if you are on the shooting line).

Well done to those archers who attended the field shoot competition at Colac recently.

The long weekend in March will be a good one for archers interested in competing. There will be another field shoot competition at Mt Clay (3 days).

For target enthusiasts the Moomba Short Range Target Tournament will be held at Moorabbin on Sunday 7th March. Details can be found at http://mac.asn.au/index.php/tournaments/97-2021-03-07-moorabbin-moomba-short-range-tournament. Paul Minifie will be attending this comp., and if there is enough interest from AoW members we may send a team down.

Congratulations to Mick Austin who recently qualified to shoot up to 50m.

Members who wish to qualify for greater distances may do so on the fourth Saturday of each month, beginning from 2pm. 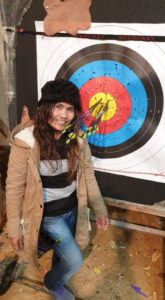 The club event that is scheduled to be shot will be a marked 24 target World Archery Field Round, to be shot on the John Goodwin Field Course. Archers from other clubs are invited to[...]
View Calendar

We are fortunate to have 5 accredited coaches to ensure that your archery experience is not only fun, but rewarding too. By learning the correct way to shoot you will find that hitting the gold on the target becomes easier every day. We can coach you in recurve, compound and longbow!

The minimum age for the Come and Try Program is 8 years.

Try archery sessions are run on Saturdays, starting at 11:00am and finishing at 1:00pm at our range at Duram Park, 200 Buckley Road, Lake Gillear. See the Come & Try under the Events section on our Home Page.

The Come & Try Program is held over 3 sessions on our indoor range with full coaching and all equipment supplied. Sessions are only $10 per person per session, bookings are essential and can be made by calling Mike Clark on 0422 868 406. Please make sure you have appropriate footwear as you will be unable to shoot if you have open toed shoes.

Anatomy Of A Compound Bow